Here the temperatures are in degrees Centigrade (°C) and relative humidity is a value between 0 and 1.

I had come across this formula in other contexts, but had not seen a reference or derviation of it. So I saw this as a challenge to determine the origins of this.

Not only will I present the mechanical derivation, but I’ll try to share some of the problem solving strategy that went along with it.

Since our formula is for dew point temperature, we’ll also need the definition for that. It’s the temperature at which the associated water vapor saturation pressure is the same as the current (usually not saturated) water vapor pressure. This means:

So another way to look at the relative humidity is the ratio between the saturated water vapor pressure at the dew point temperature versus the dry bulb temperature.

At this point, we need to find the correct formulation for the water vapor saturation pressure. This is the most difficult part as it requires some intuition as to what to search for.

If you look at the Wikipedia page for ‘Vapor Pressure of Water’, you’ll see lots of different formulations. They are all approximations with varying accuracy in different temperature ranges.

This looks like the form to try. So I then started searching for ‘Antoine equation 235’ in internet searches.

I came across a paper The Use of Dew-Point Temperature in Humidity Calculations by Lawrence A. Wood, published in 1970. In that paper, in section 4, it states (this paper used \(e\) for saturation pressure):

When \(e_w\) is expressed in millimeters of mercury and \(T\) in degrees Celsius, the constants for water between 0 and 60°C have been evaluated by Dreisbach [13a, 13b] as

There’s the 235 we were looking for! Now this was a reference to other original publications. It appears the original references for these constants were:

Here’s what that actually looks like in the Physical Properties of Chemical Compunds, Vol. III reference. The constants for the Antoine equation are in the red rectangle. 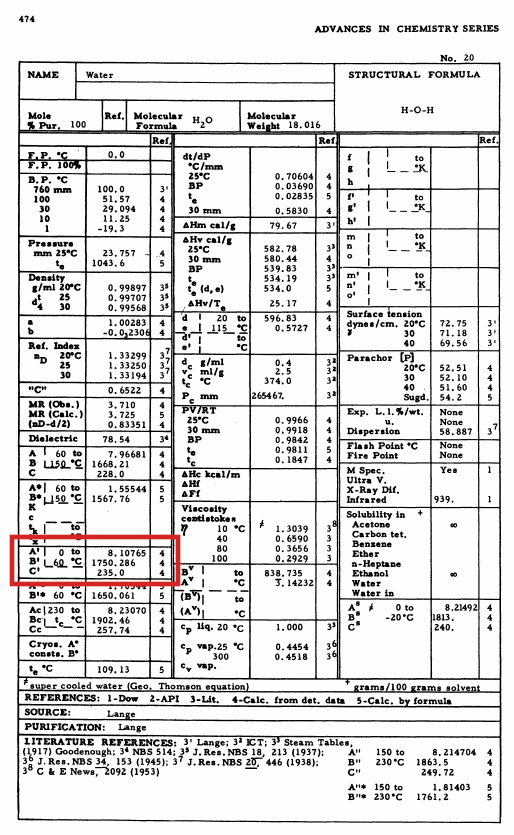 The formula for Antoine equation uses a logarithm to base 10, instead of the natural logarithm in the equations that we are trying to derive. We need to change from base 10 to base \(e\),

The change of base logarithm rule states:

The Antoine equation is in a logarithm form, so the partial pressure can be explicitly solved for by exponentiating both sides.

Now we can substitute this into the original relative humidity formula (Equation \eqref{eq:relative_humidity_2}), and use algebra to solve for the dew point temperature and derive the original equation.

Take natural logarithm of both sides

And the derivation is complete.